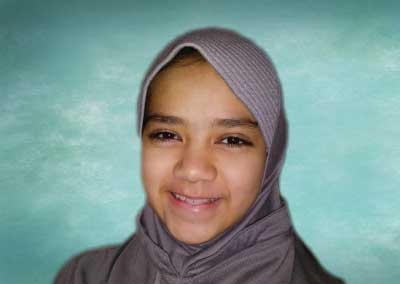 Jasmine was born and raised in Central Java, Indonesia, where she learned multiple languages, especially English, Indonesian, Javanese and Arabic. She spent 5 years at a private school that focused on taking care of the environment and had an advanced curriculum that outpaced both the public schools in Indonesia and America. As her family there, aside from her father, was Muslim, she became a Muslim. Her mother and grandmother taught her how to cook. One of her greatest concerns, shared by her little brother, was of being bullied. In 2014, her mother was diagnosed with stage 2b cervical cancer. In 2016, her mother’s kidneys started to fail and, in 2017, she died of complications. Due to her mother’s family becoming crazed with grief and anger, her father was forced to relocate them to Milwaukee, WI. Although still grieving, she has overcome her fear that she would be persecuted in the US due to her religious beliefs, and enjoys school. She was recently chosen by her school, due to academic and behavioral excellence, to be a leader in the “Where Everyone Belongs” program, in which she will mentor incoming 6th-graders. She is very excited about this upcoming opportunity! Jasmine loves animals, pegasus, unicorns, cheese and chocolate, is studying French, and is a budding artist and a really good singer.