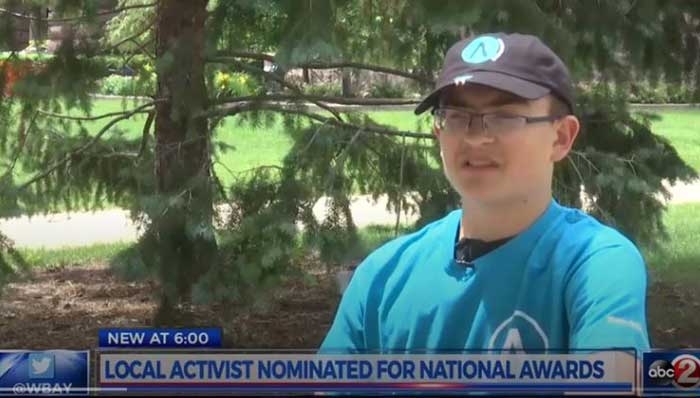 GREEN BAY, Wis. (WBAY) – “It’s amazing,” Lucas Smith says. “I love being nominated for stuff, and also getting out of Wisconsin. I don’t do that a whole lot for awards.”

Lucas, a Manitowoc native, is headed to Nashville, Tennessee, this weekend.

He’s a finalist in two categories for the National Youth Activist Awards. The awards are given out once a year by the anti-bullying movement Man Up Against Bullying.

Lucas has been volunteering and standing up against bullying since he was just six years old. Now, he’s among 100 finalists from across the country to be honored for his volunteer spirit and work to end bullying.

Lucas is no stranger to being recognized for his volunteering efforts across Northeast Wisconsin.

“It’s great to be nominated for this and be nominated for a big award,” he tells us. “My first time was actually for a different award, the Prudential Spirit of the Community Awards, which was also another national award I went to.”

The first award he’s nominated for this weekend is called the Triumph Award.

“This award is if you had a difficulty and overcame it in your life, and mine is my disability of autism,” he says.

The other is the Helpful Humanitarian Award, given to a kid who’s helped organize events or programs that help others be the change that is needed in communities.

He’s exemplified this through a number of volunteer opportunities.

“I also do work with Generations Against Bullying, and my new program was the Backpack Buddies Program that we have in Manitowoc where we pack backpacks for foster kids,” he explains.

Lucas was nominated for the awards by Generations Against Bullying, an organization that encourages kids to stand up against bullying.

“He’s been a terrific supporter of Generations Against Bullying,” James Dean, the organization’s executive assistant and co-founder, says. “Lucas comes to almost all of our events and helps support all that we do.”

GAB, based in Milwaukee, was founded two years ago after two consecutive years of bomb threats.

The organization empowers kids through the peer ambassador program to inspire students to be upstanders.

“If a bystander to bullying becomes an up-stander in a non-threatening way, the bullying will stop in about ten seconds about 85 percent of the time,” said Dean.