GAB Peer Ambassador Spreads Message of Perseverance After Being Bullied. 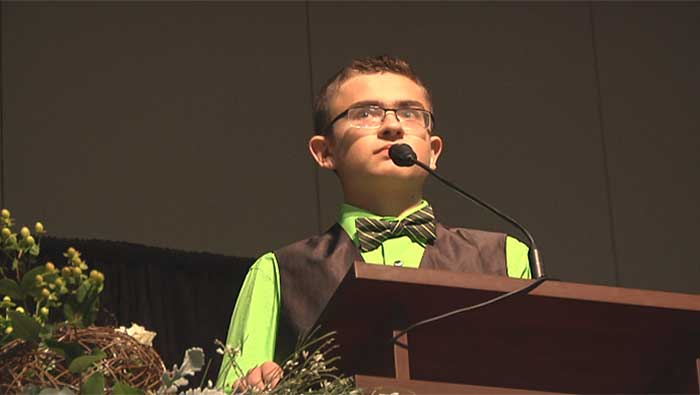 GREEN BAY, Wis. (WBAY) — A young man from Manitowoc is honored at a Green Bay awards luncheon Thursday for going above and beyond to help others.

Not only has 14-year-old Lucas Smith turned his own challenges into triumphs, he is making it his mission to help others do the same.

Smith was invited to attend the 10th annual Ethics In Business Awards Luncheon.

“We were just blown away,” said Rebecca Fairman, Executive Director of Connections for Mental Wellness. “We had never done a ‘Youth in Ethics’ award, but after reading his nomination, we realized this is a category we definitely need to start acknowledging.”

Smith said he was bullied at a young age.

“The worst occurrence was probably when I was outside one day and some kid broke my glasses,” said Smith.

But Smith didn’t let that bullying experience, or his autism, stop him from moving forward.

“It’s something that changed me in a good way, other than a bad way,” said Smith.

He turned those challenges into positives by getting involved in the community. He started volunteering with his local humane society at the age of six. He even had a knack for animals who needed a little more care, like his cat with asthma or his dog with a heart condition.

“They feel more special to me and we also have more of a companionship because we are both different,” said Smith. “I feel like I can help them more because we both have problems.”

Smith is also part of his local miracle league, Special Olympics and a volunteer with Generations Against Bullying where he spreads his message of perseverance with others.

“I told them don’t let it change you in a negative way,” said Smith. “Just take that as a thing that will make you stronger and that will push you forward.”

Smith said people still treat him differently, but he knows there’s more to life than how people treat you. Smith said it’s about how you treat others.

“Even if you are different and not the same, you can still be a huge change in the world,” said Smith.

Fairman said that is why Smith is being honored at the luncheon Thursday.

“He is just incredible in the way he has used his own challenges to help others recognize how all of those challenges can truly be strengths,” said Fairman.

Smith spoke at the luncheon after receiving his award and this is what he had to say, “I am going to end with a quote from Gordon Hinckley, “Being humble means recognizing we are not on this earth to see how important we become, but how much difference we can make in the lives of others.”

14-year-old spreads message of perseverance after being bullied