Lincoln Middle School on Wednesday once again became the epicenter of goodwill in the face of bullying.

Desiree Andrews, her cheer leading squad and the Lincoln Knights basketball team now known for stepping in to stop bullies from the stands were all celebrated at the school, fresh off national media appearances.

“These boys stood up for her, and we can’t be more proud of them,” Desiree’ solder sister Haley said. “They absolutely deserve all our attention that they are getting.”

Linda Lee, president of Generation Against Bullying, presented Desiree and the team with their own medals as a model for the nation on bullying.

Armed with statistics on how to stop bullying in the first 10 seconds, she also had advice for everyone.

“Be kind to everyone out there because everyone is struggling with something,” Lee said. 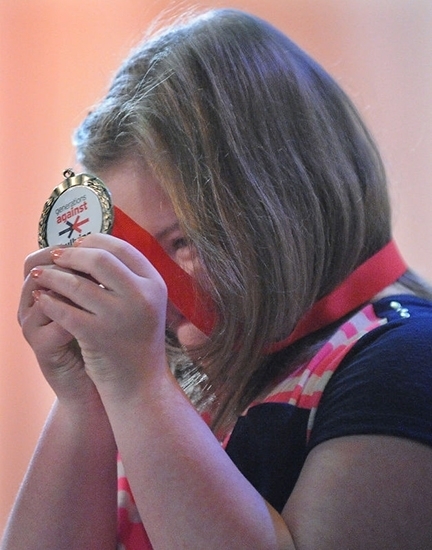 Desiree Andrews shows a medal she and the Lincoln Middle School cheer team and basketball team were given from Generation Against Bullying during an assembly Wednesday afternoon.

“People are starting to see we’re not going to tolerate a bully,” Savaglio-Jarvis said. “This is proof that the Lincoln basketball team and cheerleaders have
made a difference in the life of one individual but have impacted so many right now.”

The players who left the court during a timeout to tell someone in the crowd to stop teasing their cheerleader with Down syndrome was a message now echoing nationwide.

“They were talking about her. It’s not right. It surprised a lot of people. But if you see someone being bullied, stand up because more likely somebody else is going to stand up with you,” player Benjamin Clark said.

Celebrated for their humbleness, point guard Dateran Adams said, “The attention is great, but it really doesn’t matter to us. I think Desiree should have more.”

Clark’s mother, Patricia Woods-Clark, was beaming with pride at the school assembly as firefighters, the Veterans of Foreign Wars, county and school officials and even officials from the Milwaukee Bucks and Kenosha Kingfish arrived to present gifts and honors for Andrews and her teams.

“There is so much bullying going around, not only in schools but workplaces,” Woods-Clark said. “Time out is what they said, and I’m so proud to have a child that’s part of that team. Everybody should have a fair chance to be accepted. Lincoln Middle School has set the mark.”

Woods-Clark said the bullies in question should not be punished but re-directed in a positive way. Officials from Unified declined to disclose details of how the kids in question were addressed after the incident last year.

Unified has experienced a number of high-profile bullying incidents over the last few years, Savaglio-Jarvis said, and an anti-bullying committee is making things better. She said a new policy will be implemented next school year.

“We want every child safe in their school environment so they can learn,” Savaglio-Jarvis said.

Andrews sat centerstage up front next to her squad. She smiled, waved and gave people thumbs up and said “thank you” one more time to the basketball team. After the assembly, she had a simpler message for the people who tell her they don’t like her.

Her sister wanted everyone to know that people with Down syndrome should be embraced.

“They are living, friendly and inviting people,” Haley said. “Don’t be afraid of them. They are going to love you and invite you anywhere.”

Generations Against Bullying honors Lincoln Middle School’s Desiree, the basketball and cheer team for standing up to bullies. 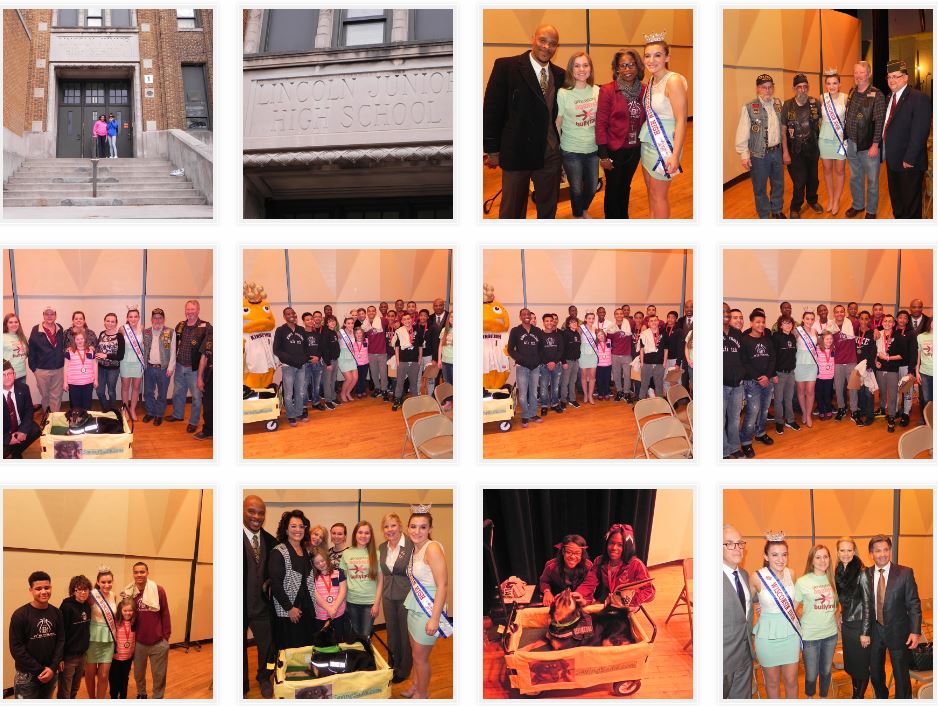